Arthritis, which describes inflammation in the joints in the body, is relatively common in the feet and in ankles.

Arthritis is a collective term for over a hundred different types of conditions involving inflammation in joints, and is also common in the hip and knee joints.

Any arthritis will cause a degree of stiffness and pain in the joint, from mild to severe, and as a result affects all sorts of normal daily activities.

There is no cure for arthritis, however there are a range of treatment options. 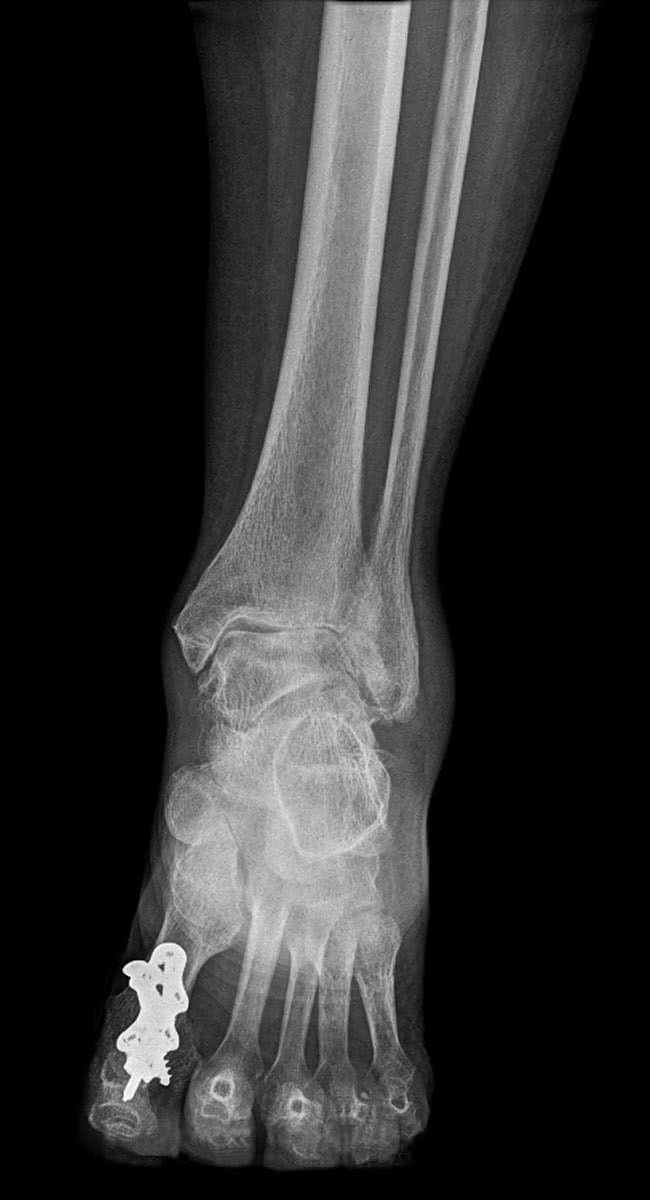 Types of arthritis affecting the ankle

This type of arthritis is caused by the wearing away of the cartilage between the bones. This is a degenerative disease and so affects older people (i.e. older than 50) more than younger people.

This type of arthritis is a form of auto-immune disease, where the body's own immune system attacks its own tissue, affecting the bone, the cartilage and the ligaments as well as the synovial membrane, which surrounds the joint. It tends to impact more than one joint and is 'symmetrical’, that is it tends to affect the joints on one side of the body only.

There is also a type of rheumatoid arthritis affecting children, termed Juvenile Rheumatoid Arthritis (JRA). It presents quite differently from the adult variety and is treated differently too.

This term refers to arthritis that develops after injury (ie trauma, such as dislocations or fractures) to the foot and/or ankle. The injuries can be to the cartilage (meniscus), the ligaments or the bone or a combination of these, and symptoms of arthritis can take a long time to appear after the initial injury. The likelihood of arthritis developing in a joint that has previously sustained an injury is seven times greater than with a joint that has not.

These three types of arthritis are the commonest types affecting ankles. Other less common conditions include…

Gout is inflammation of the joints caused by an excess of uric acid in the body, which then forms as small crystals in the joints. It particularly affects the big toe, but can affect other joints. Men are more prone to the condition than women and older people more than younger people.

This can occur after a case of infection affecting the gastrointestinal system or the urinary tract or genital area. The ankle, knee and foot tend to be the most affected by this type of arthritis.

This type is associated with the skin disease psoriasis. It tends to affect the ankle and can occur either before or after the appearance of the skin condition.

Infectious arthritis is sometimes called ’septic arthritis’. This is associated with an infection in the joint itself, caused by bacteria in the bloodstream or in some cases a fungal or viral infection. When it occurs, the ankle is often affected.

Symptoms of arthritis in the ankle include...

In most cases, symptoms appear gradually over time and get worse, although sudden onset of symptoms can occur. The weather can also impact symptoms, getting worse often during damp weather. In almost all cases of ankle arthritis, being overweight makes symptoms worse and simply reducing weight will generally alleviate them.

A physical examination and review of medical history will allow an initial diagnosis. Your doctor may also ask to see your shoes to check for any uneven wear and to see if they are providing adequate support for your foot and ankle. They may want to observe you as you walk in an examination called ‘gait analysis’.

Further tests may be needed to confirm any diagnosis. These may include...

X-rays will show any changes to bone structure, such as bone spurs (called 'osteophytes') and will indicate which type of arthritis is present. These x-rays are taken while you are standing up, which allows better visualisation of the bones when they are load-bearing

These may be necessary to visualise bone density and to analyse soft tissues in the affected joint(s).

Blood tests will also help to determine the type of arthritis present.

Knee arthritis can often be managed with a combination of non-surgical treatments. Your General Practitioner will be able to help with the implementation of these. Some options include: